On April 12th 2017, the Chinese-style solar greenhouse at Wageningen University & Research, BU Greenhouse Horticulture, next to Delphy Improvement Centre in Bleiswijk (NL) was officially opened by King’s Commissioner of Zuid-Holland Jaap Smit and the Commercial Counsellor of the Chinese embassy Zhang Guosheng. The official opening was also attended by Loek Hermans, Chairman of Topsector Horticulture and Starting Materials, Pieter van de Stadt, Mayor of Lansingerland, Albert Abee, Alderman of Lansingerland and governor of “Metropoolregio Rotterdam Den Haag” and representatives from the greenhouse horticulture supply industry of the Netherlands. 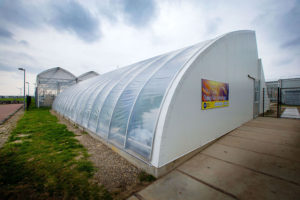 This solar greenhouse, equipped with high standard technology, simulates the (climate) conditions of a typical greenhouse in China. Research will enable Dutch suppliers to align their technology with Chinese conditions. This provides Chinese growers the opportunity to increase their crop quality and yields. This unique Chinese style solar greenhouse uses solar energy buffered in a concrete wall. It will be used to grow vegetables like cucumbers and tomatoes. The first crop that will be grown in this greenhouse is cucumber. The performance will be compared with solar greenhouses in China.

The greenhouse is equipped with Dutch technology such as a climate screen, soilless cultivation with an irrigation unit and a climate computer. By demonstrating and experimenting, Dutch suppliers show that their technology can be aligned to Chinese circumstances, enabling Chinese growers to increase production and crop quality. 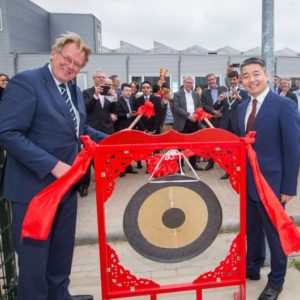 The Chinese-style greenhouse was officially opened by King’s Commissioner of Zuid-Holland Jaap Smit and the Commercial Counsellor of the Chinese embassy Zhang Guosheng.

This project is set up by ‘Partners in International Business’ (PIB), a group of leading Dutch horticultural companies and knowledge institutes that are active in the Chinese market. The project aims on strengthening the position of its members (Hoogendoorn Growth Management, Ludvig- Svensson, Ridder Drive Systems, Hortimax, Delphy and Wageningen UR) in China by promoting their technology and demonstrating the advantages of using this technology and knowledge in China’s current horticulture sector. The project is funded by the Rijksdienst voor Ondernemend Nederland and Metropool Regio Rotterdam Den Haag. 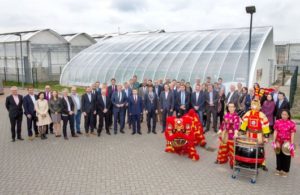