For the third year in a row a trial on tomatoes with 100% LED-lighting has started inside the Improvement Centre of Delphy in Bleiswijk. The trial of season 2014-2015 has finished in October. This particular trial had very good results and new clues towards a new trial. The new crop was planted on October 13th for the growing season 2015-2016. The trials are executed on semi-practical scale. In other words, the trials will provide results that can be applied in practice almost immediately. The compartment has an acreage of 1000m2 in which we are dealing with the same factors and problems as the growers are encountering on a daily bases in practice. 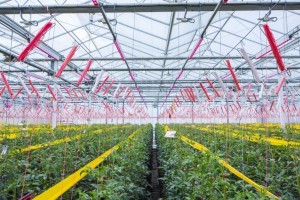 Motivation
The added value of LED lighting should pay off in the winter and therefore we focus on a high winter production in this trial, after which the crop needs to be ready towards the summer. Important for growing with LED light compared to Son-T light is the absence of radiation heat. The lack of radiant heat provides a slower truss production, which must be taken into account in the growing strategy. The inter lighting offers the possibility to work with a higher stem density, so that a good production can be achieved. The lack of radiant heat also leads to longer use of lighting. At the trial of the 2014-2015 season a production of 100,6 kg/m2 was achieved with the variety Komeett. 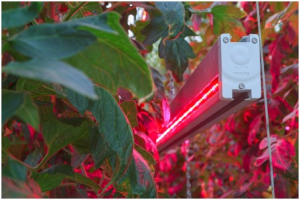 Trial description 2015-2016
In order to realize a high winter production the goal of the trial in order to obtain more insight in the relation between the available light, the amount of leafs which intercepts this light, and which allows assimilation (LAI), and the number of fruit that these assimilates require . The greenhouse is divided into two light strategies: artificial light above the crop (standard), and artificial light centered above the path. By positioning the artificial light above the path the light has a different angle with respect to the crop and it can penetrate deeper into the crop. Both sides of the crop are exposed which should lead to better efficiency of the light thus achieving better results. In addition to this there are several variations in this trial in terms of the stem density and the number of leaves per stem. This allows for a variation in the number of leaves per fruit, but also in the number of fruit per m2. This should ultimately pay back in increased production levels. The two previous trials were set-up with the variety Komeett, however for this trial the variety Merlice was chosen. Merlice is the most widely grown variety in artificial light crops and most productive in that respect. By choosing another variety broadens the knowledge of cultivating with LED artificial light. Developing and sharing knowledge
This trial is a collaboration between Delphy, Philips, Monsanto and Cultilene. The objective of this project is up to grow below 100% LED lighting, focusing on a high winter production. The lighting strategy is made up of 105 µmol GreenPower LED toplighting and 2 x 53 µmol GreenPower LED interlighting. Within this trial a new cultivation strategy (lower LAI/stem, more stems per m2), and new positioning of the lamps tested above the path.

To achieve the goals, but also to explain what is actually happening with the plant and the distribution of assimilates there is an intensive cooperation to analyze the data and developing knowledge. Ultimately, what matters is that the knowledge gained is useful in practice. Knowledge from practice constitutes an added value for the results to be delivered by this trial. To accomplish this, the previously mentioned parties together with involved growers meet on a weekly bases. The cultivation area is intensively supervised by crop advisors of Delphy. Through guiding this trial they are gathering new knowledge for growers and colleagues.

This project is made possible and financed by the following parties: Philips, Monsanto, Cultilene & Delphy. 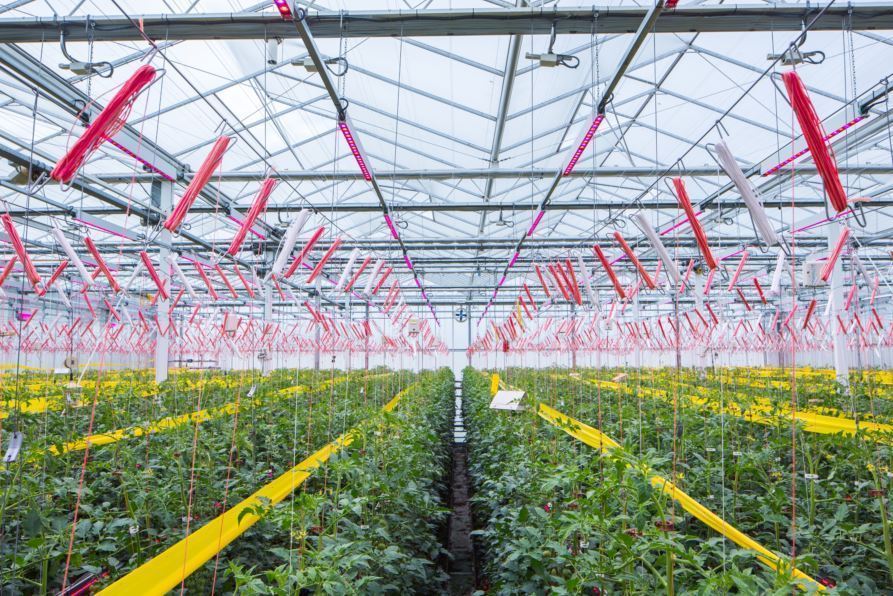